There’s been a few little quirks with Windows 10 that I have noticed or people have reported to me but the most annoying one I’ve encountered so far has been not being able to access the TCP/IPv4 Properties on a PPTP VPN Connection. 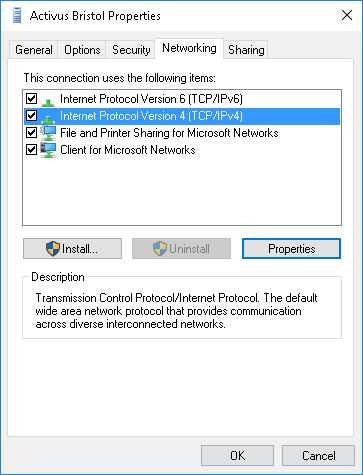 Setting up a VPN connection on Windows 10 has become a quicker process with less configuration, however when you need to adjust the configuration such as adding a DNS suffix it is not at all simple if you cannot access the properties window for the TCP/IPv4 protocol. Regardless of whether the user is an administrator on the machine or not the properties button is completely unresponsive.

All is not lost however as Microsoft have apparently fixed the issue in a Cumulative update for Windows 10 Version 1511 so upgrading to the most recent build of Windows 10 and installing all outstanding updates should resolve the issue. In the meantime a workaround is to copy a working and correctly configured VPN connection from another machine to the affected machine. The file is rasphone.pbk and is located in the following folder
%UserProfile%\AppData\Roaming\Microsoft\Network\Connections\Pbk

If necessary it can be modified in a text editor.

If you are on Windows 10 Version 1511 already and are experiencing this issue you can download the necessary cumulative update directly from http://catalog.update.microsoft.com/v7/site/Search.aspx?q=KB3105211